UPS to protect systems. And what protects UPS?

Typically, in medium- and large-size data processing centers, separate rooms are allocated for uninterruptible power supplies (UPS). They are critical for the operation of all IT and engineering systems and require the proper organisation and maintenance of the microclimate. In this article, with a specific example, we will show how to use the technology of computational modelling of thermodynamic processes (Computational Fluid Dynamics, CFD) to predict the operation of an air conditioning system, and give basic recommendations for UPS rooms.

Consider a project, in which it was necessary to perform CFD modelling of the air conditioning system of a non-standard UPS room and get practical recommendations for improving its operation. An uninterrupted power supply equipment with a total capacity of 2.5 MW is installed in the room. To remove heat surpluses that occur during the operation of the switchboard equipment, UPS, their cyclic charging and discharging, an air conditioning system based on cabinet-type water conditioners has been designed at the facility. In total, the room is equipped with five air conditioners (four operating and one standby). 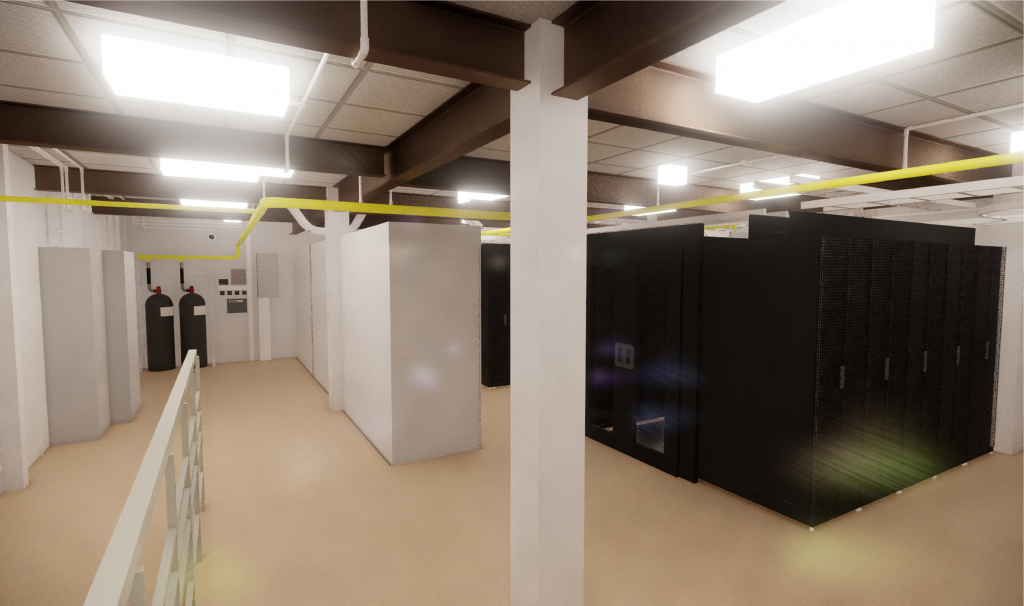 The room is "difficult" in terms of air conditioning due to a number of factors:

Fig. 2. Layout diagram for the equipment in the room

In contrast to the DPC, for UPS rooms, either household or "semi-industrial" ceiling and duct-type air conditioners are still used, which are not designed for 24/7 year-round operation. However, the main mistake is that ΔT on these air conditioners is much higher than that on the UPS cabinets. In fact, the balance of power in the volume of the room matches, however, the balance of air flow rate does not match. Insufficient air exchange can cause overheating of the equipment. Unfortunately, this important point is often missed in the calculations. But this is the fundamental difference between air conditioning systems for UPS rooms and server rooms and DPC with high power density. Therefore, it is necessary to use a precision air conditioning system in UPS rooms, that makes it possible to adjust the operating temperature and air flow rates in a wide range.

In the CFD model created by us (Figure 3) the following heat generating objects were specified: UPS power modules (PM), distribution and parallel operation switchboards (S). Additional heat gains from the battery cabinets (B), lighting, ventilation, thermal conductivity of the walls were not taken into account due to the small effect on the result.

Fig. 3. Layout diagram for the equipment in CFD model

Main characteristics of the design model:

During the CFD modelling, the following results were obtained:

We would like to pay attention to the modelling of switchboards and power cabinets that generate heat. For such equipment, it is impossible to directly convert geometry from 3D model to CFD model with all circuit breakers and busbars, fasteners: there is a large number of small elements that do not affect the result, but complicate the model, and it is impossible to correctly set the thermal load. Therefore, we used a design model consisting of a cabinet body, an equivalent heat generator in the cabinet and a ventilation device that cools the cabinet. As a result, we got a stable design diagram.

When analysing (interpreting) the results of CFD modelling, various visualisation tools were used: sections, iso surfaces, iso volumes and traces. All of them clearly demonstrate, how the air is distributed in the room, what equipment configuration will be optimal, and also make it possible to see overheating and stagnant zones. Based on the data obtained, a list of recommendations for improving the performance of the air conditioning system was formed. 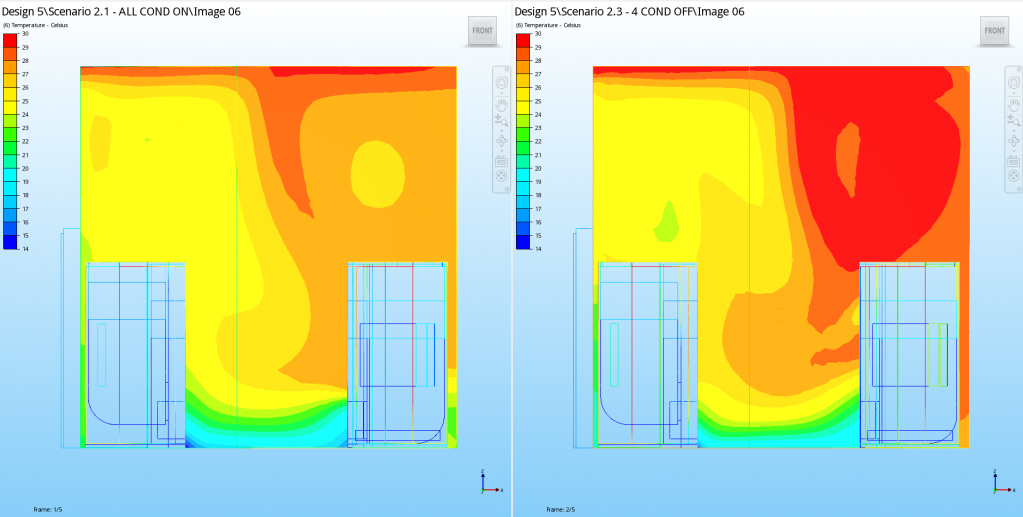 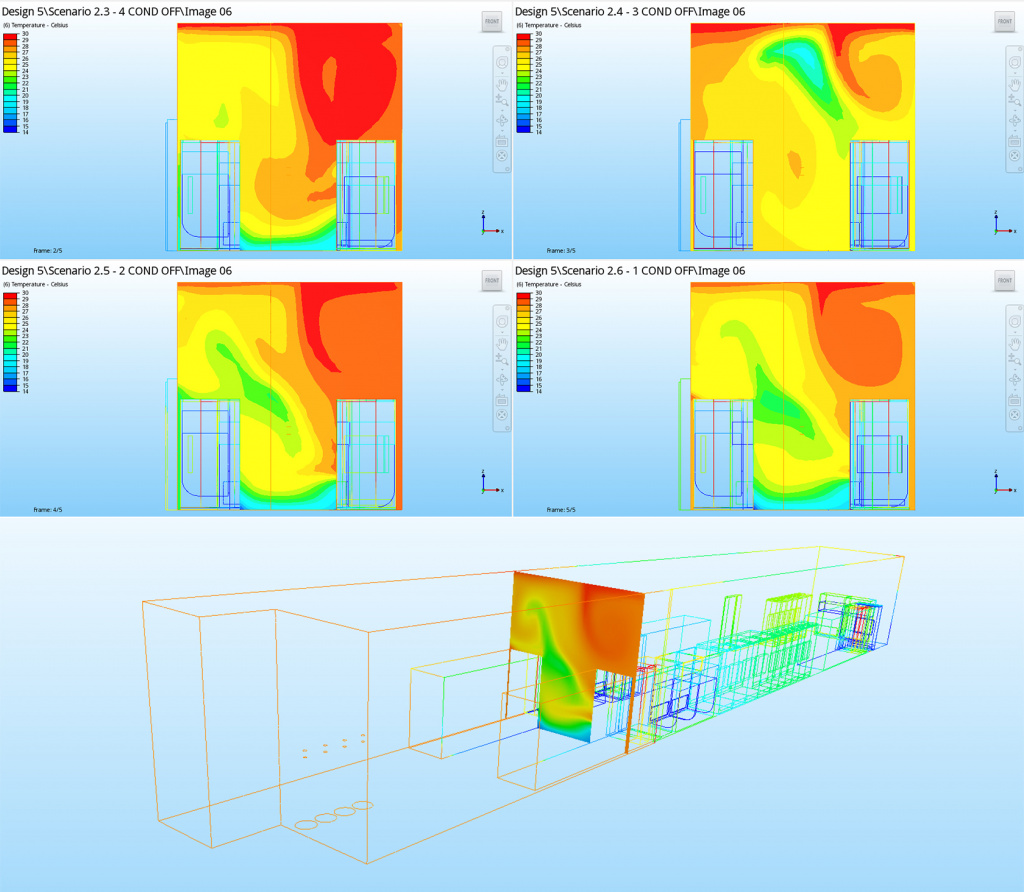 Fig. 5. Examples of visualisation of calculation results in CFD. Comparison of four modes of rotation of air conditioners in the Decision Center 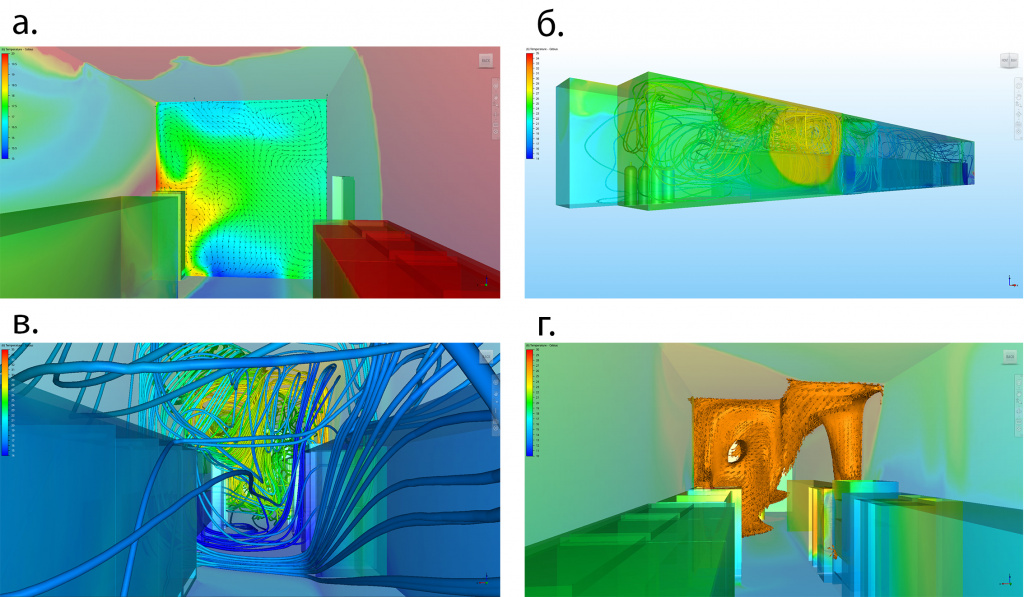 Fig. 6. Examples of visualisation of calculation results in CFD.

a — temperature distribution in the vertical section (planes) with projection of the velocity vectors; b, c — current traces; d — iso volume with a temperature of +27 °C

Fig. 7. Graphs of temperature distribution in the center of the "cold" corridor at el. 2.2 m from the raised floor level, all operating modes of the air conditioning system

Practical recommendations for the organisation of air conditioning systems for UPS rooms: