STEP LOGIC is a network and system integrator with a 25-year history of successful work in the Russian IT market. The company has been using BIM based on Autodesk Revit since 2016. Collaboration is carried out through the Revit-server. In 2018, Autodesk CFD was implemented at STEP LOGIC for the simulation of thermal processes, in particular, the adjustment of air conditioning systems. "We chose this product due to its wide functionality and two-way communication with Autodesk Revit," said Vadim Kalle, Deputy Head of the Engineering Systems Department at STEP LOGIC. "When a model changes geometry in Revit, the model in CFD is automatically updated." 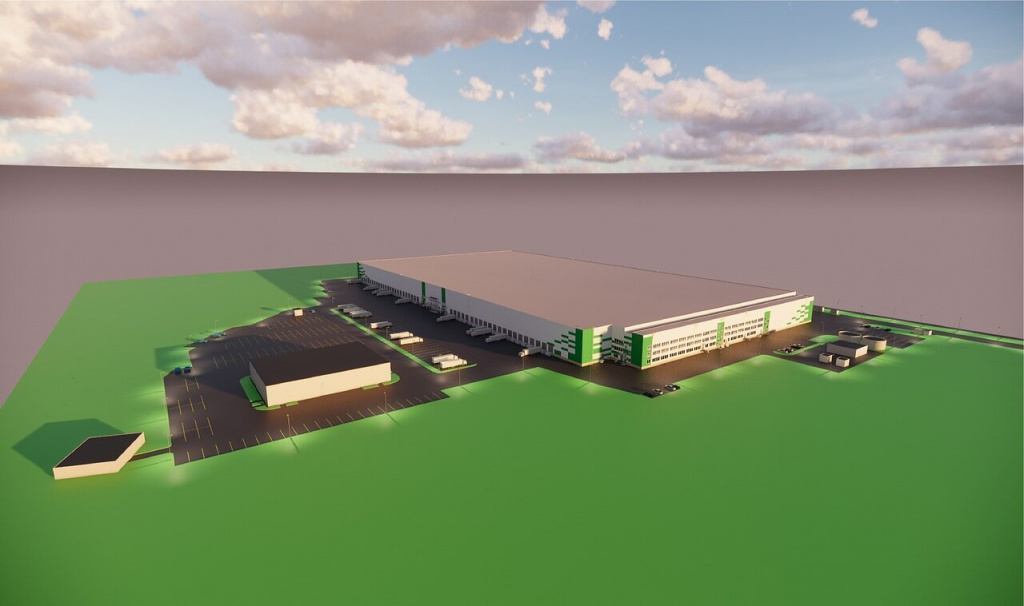 One of the first projects implemented using the Revit/CFD bundle was a large logistics centre The company was faced with the task of designing IT and engineering infrastructure of a data processing centre (DPC), a warehouse complex, and adjacent buildings. The engineering systems that were to be designed included air conditioning and ventilation systems, power supply networks, structured cable systems (SCS), video surveillance and security systems, and gas fire extinguishing systems. It was necessary to implement telecommunication cabinets with insulation of "cold" corridors, raised floors and other elements designed to house equipment in the model.

BIM as an advantage in the tender

The company worked in BIM already at the tender stage, which, according to Vadim Kalle, largely determined its outcome: “We were the only ones who already at the stage of the technical and economic proposal provided a ready-made BIM-model and visualisation of the data centre and engineering systems. For the month set aside for preparation for the tender, we worked out several solution options with working documentation."

The company won the tender and was able to prove to the customer the viability of using BIM for the project as a whole. One of the decisive arguments was the possibility of BIM to reduce costs for implementation, not to overburden the budget for materials and equipment. As a result, companies that rely on BIM technology worked as adjuncts to the project of the logistics centre with STEP LOGIC."

The first and most obvious advantage of BIM, which is noted in the company, is connected with the ability to quickly test the model for collisions and the availability of advanced tools in Revit for linking various systems. "Before the introduction of BIM, it was often the case that communications, ideal on paper, at the installation stage intersected with load-bearing structures, existing systems," says Vadim Kalle. "We had to make adjustments to the project on-site, change the laying of cables, trays and pipelines. When working on the logistics centre, all intersections were eliminated at the BIM-model stage. The associates interactively tested the model for collisions and quickly corrected them."

The main difficulty, which we managed to cope with thanks to BIM, is the linking of numerous engineering systems. The task was complicated by the fact that the customer periodically made significant changes in the technical task. Some edits have already occurred during the construction phase of the facility. In particular, it was necessary to change the location of the capacitor units on the outdoor site to save space for the passage of trucks.

"Developing these changes delayed the design process by about two weeks," says Vadim Kalle. "If we had not used BIM, I would have spent, I think, about a month. First, we made changes to the parametric model, so all parts of the model were adapted automatically. Secondly, we were able to quickly agree on a new solution. The customer does not always know how to read flat drawings; when using a 3D model, we shorten the approval process approximately by half. Thirdly, we gave the subcontractors the task of the section on the design of metal structures (MS) in 3D, so that they completed their part without errors. And, fourth, after making all the changes, we automatically received new specifications for materials." 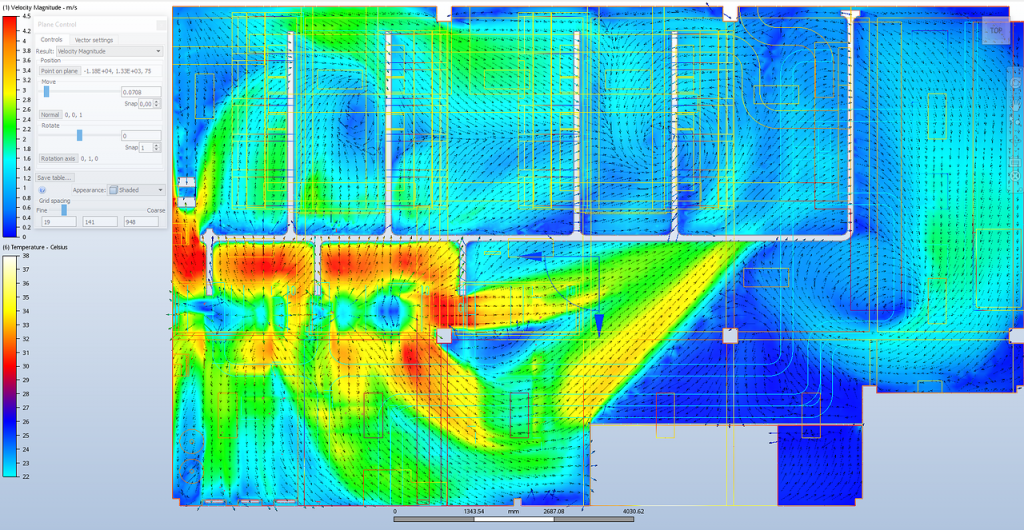 The results of the calculation of the server in Autodesk CFD. The distribution of air velocities under the raised floor.

CFD: modelling at a new level

Another important task was to ensure the correct temperature in the data centre, simulate it at a real design load and select the optimal configuration of partitions to separate the "cold" and "hot" corridors, adjust the raised floor gratings. "To solve this problem, we unloaded the model from Autodesk Revit into Autodesk СFD," says Vadim Kalle. "The model has been simplified, but it was not just a "box", but a space with complex geometry, bolts, and columns. The model had cabinet air conditioners, raised floors and underfloor space occupied by communications, isolated "cold" corridors, an uninsulated area with an uninterruptible power supply (UPS). First, during the simulation, we discovered hot air flow zones into the cold zone of the UPS. Having installed a partition there, we redistributed the air flow, and the cooling began to work properly. Then we simulated various scenarios of equipment and air conditioners. Having identified the most problematic scenario of all possible, we calculated the best way to adjust the grids for supplying cooled air to the UPS area." 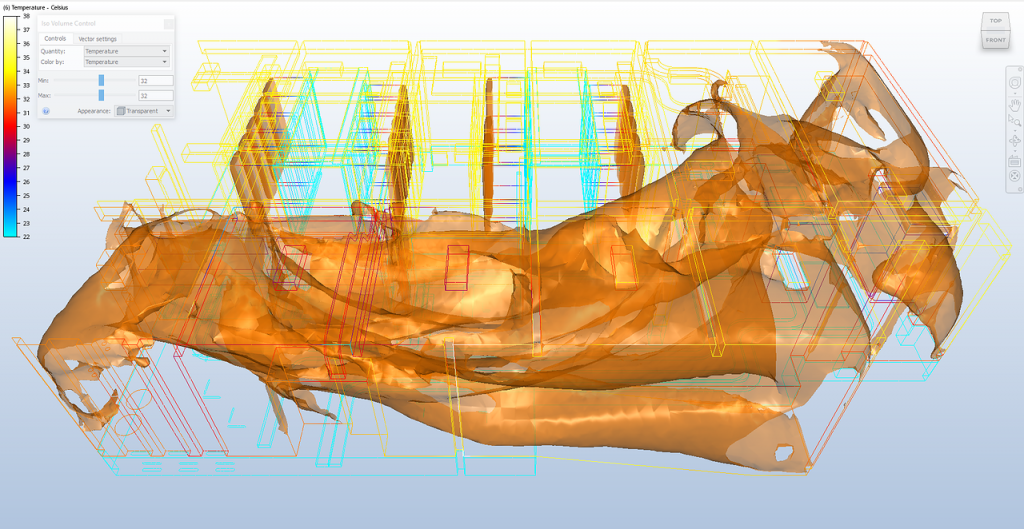 The results of the calculation of the server in Autodesk CFD. The volume of air with a temperature of 32°C.

Before the introduction of CFD, similar tasks in the company were solved with the help of Excel: the table recorded the thermal loads, temperature drops on the equipment, determined the heat surplus and, on this basis, calculated the capacity of air conditioners. "We assumed the circuit was working properly because the air flow and heat output were balanced," says Vadim Kalle. "However, they could not calculate the distribution of speed and temperature fields in height. In addition, this approach gives exact numbers only for the case of simple geometry. Therefore, earlier we could only detect the overheating zone after starting the systems. CFD modelling can show them all already at the stage of preliminary design." 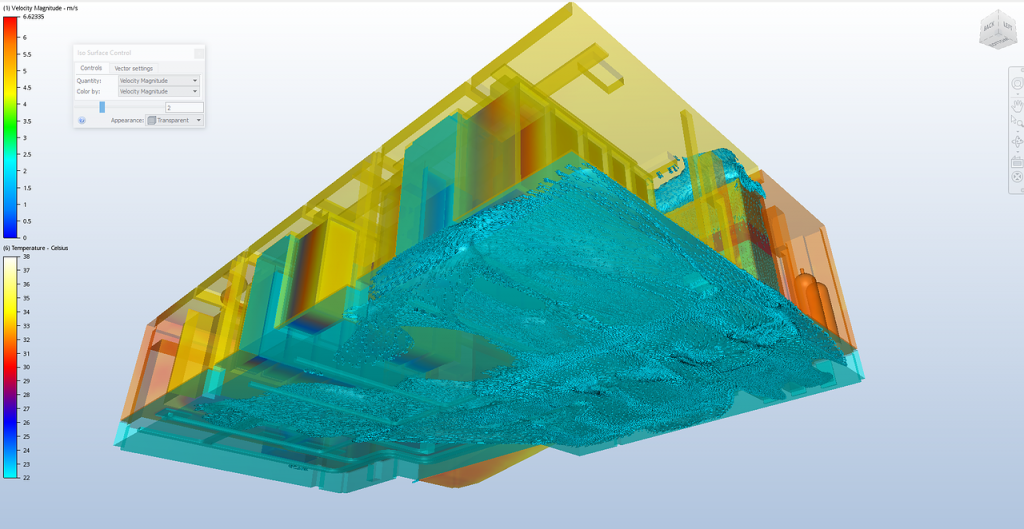 Calculation model of the server in Autodesk CFD.

From model to a real object

Another advantage of BIM, in the opinion of STEP LOGIC, is the ability to quickly and clearly draw up specifications for installation. The project of the logistics complex in the "risk zone" were three sites: - complex communications under the raised floor; - supporting structures of raised floor with additional passages and a welded ramp; - located on the street shelf - welded construction of 8x10 meters. All these sections were shown to installers in the format of a 3D model, and as a result, everything was done without errors and delays.

Results of the project

STEP LOGIC worked four months on the logistics centre. Two months were spent on the design and issuance of documentation, about a month – on CFD-design, and the remaining month – on the supervision of installation. "The experience we have gained on this and previous projects has shown: BIM accelerates work by about 50% when compared to work in 2D, which the company practiced until 2016," concludes Vadim Kalle. The next step in integrating BIM tools in STEP LOGIC is to use the Revit Live cloud service and a special add-in for Revit-Enscape, which the company introduced in the summer of 2018.